Pre-order LOYALTY and Enter the 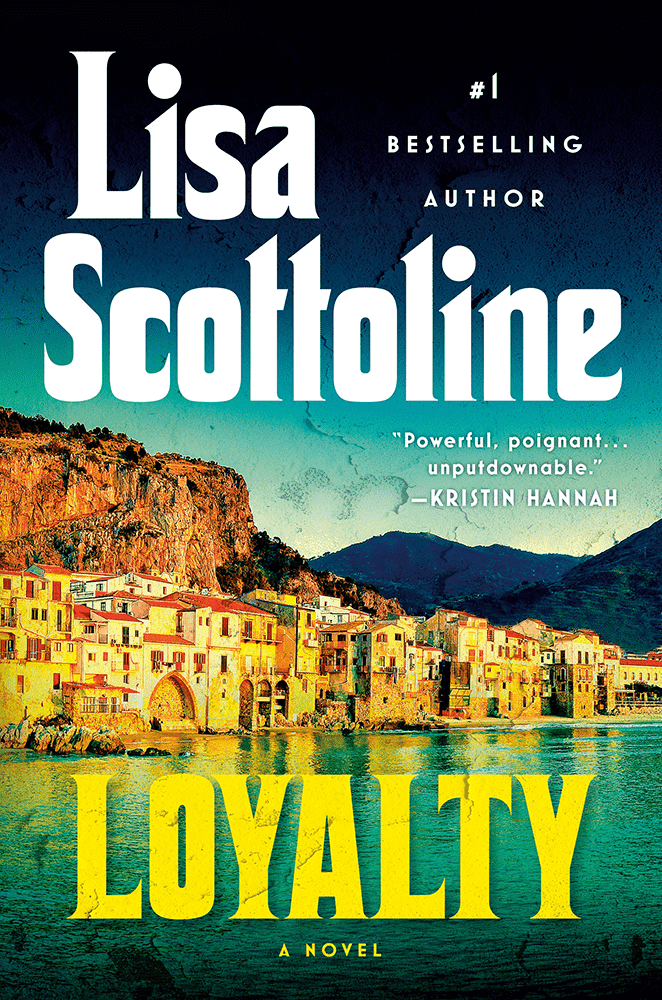 #1 best-selling author Lisa Scottoline delivers Loyalty, an emotional, action-packed epic of love and justice, set during the rise of the Mafia in Sicily.

Loyalty can save a soul, or destroy one.

Franco Fiorvanti is a handsome lemon grower toiling on the estate of a baron. He dreams of owning his own grove, but the rigid class system of Sicily thwarts his ambition. Determined to secure a better future, Franco will do anything to prove his loyalty to the baron. But when the baron asks him to kidnap a little boy named Dante, Franco makes a decision that will change his life — and even the history of Sicily — forever.

Gaetano Catalano is an idealistic young lawyer whose devotion to justice is tantamount to a calling. He’s a member of the Beati Paoli, a real-life secret society of aristocrats who investigate crime in Palermo, a city riddled with graft. Gaetano sets out to find the boy and punish the kidnapper, but his mission leads him to a darker place than he had ever imagined.

Meanwhile, Mafalda Pancari is a new mother rejoicing at the birth of her daughter Lucia, when disaster strikes. And Alfredo D’Antonio is a goatherd living as a hermit, under constant threat of being discovered as a Jew.

This cast of unforgettable characters collides in this epic tale of good versus evil, as Loyalty twists and turns to its monumental showdown. Readers will be transported to the dramatic and ruggedly beautiful island of Sicily, the jewel of the Mediterranean, where lush lemon groves and mouth-watering cuisine contrast with a turbulent history of colonization and corruption. Scottoline brings her decades of thriller writing to historical fiction, creating in Loyalty a singular novel that no reader will be able to put down.

Scottoline brings nineteenth-century Sicily alive in this historical thriller with fairy-tale themes, revenge quests, and compelling heroes reminiscent of William Goldman’s The Princess Bride. Every scene is a full sensory experience, as Scottoline weaves lemon-scented breezes, the ocean’s sounds, and sun-baked piazza stones into a timeless, tragedy-strewn story of love, power, and redemption. History fans will appreciate the novel’s well-researched foundation, especially concerning the origins of the Sicilian Mafia and early mental-health institutions.

“This brilliantly-told story about the rise of the Mafia is an unforgettable saga of the powers of corruption and courage, injustice and honor, family secrets, loyalty, and love set against the evocative backdrop of Sicily. Scottoline deftly explores the darkest passions and the deepest compassion of human nature in a fabulously twisty historical thriller that will keep you guessing until the very end.”

Meg Waite Clayton, author of The Postmistress of Paris

“A poignant, masterfully-crafted epic novel set in Sicily during the rise of the Mafia, Loyalty places unforgettable characters on a collision course, as ambition and the quest for power threaten the bonds of family, society, justice, and love. Rich with intrigue and secrets, tension and tenderness (not to mention the intoxicating scent of lemon groves!), this is Lisa Scottoline at her best!”

Jennifer Rosner, award-winning author of The Yellow Bird Sings and Once We Were Home

“Loyalty is a beautiful, bold, and brilliant masterpiece that, in the spirit of The Godfather, reminds us of the perils of blind allegiance, the consequences of betrayal, and the lengths to which one will go for family. A breathtaking tour de force.”

“A powerful, poignant exploration about the rise of the Mafia in Sicily, Lisa Scottoline’s Loyalty is a gripping, compulsively readable tale of courage, loyalty, family secrets, and the price of honor. An unputdownable piece of historical fiction that puts Scottoline’s talent for writing twisty plots and unforgettable characters on full display.”

“Loyalty is a wonderfully atmospheric and operatic tale about the origins of the mafia in the wake of Sicily’s crumbling feudal system. Power loves a vacuum, and this book’s most ambitious characters step right in at the peril of their own souls. At heart, though, this is an earthy novel, the vivid details of which make you smell the sweet lemon groves, feel the salty sea spray on your cheeks, and taste the pasta, pistachios and rich cheeses of Sicily. With a tangled plot of child kidnapping and brotherly revenge that unravels for a gripping and… Read more “Stephanie Dray, author of The Women of Chateau Lafayette”

Stephanie Dray, author of The Women of Chateau Lafayette

“I haven’t read a story set in Sicily that was this good since Giuseppe Di Lampedusa’s amazing novel The Leopard. The reader knows when an author’s heart is in their writing, and Lisa Scottoline’s heart and soul is in Loyalty. Historical fiction, when it’s good, is a time machine, carrying us back to a vanished world that we can inhabit for awhile. Loyalty does that and more—it’s a magic carpet ride that will transform us and stay with us. A beautifully written tale, wonderfully told by a master storyteller.”

“Scottoline brings her characters to life, instilling them with wit and intellect as they navigate the corruption of Sicily’s law enforcement. Historical crime fiction fans will be riveted.”

★ Amazon Best Book of 2022 - Mystery/Suspense/Thriller of the Year

★ Kirkus Reviews Best Book of 2022 - Mystery/Thriller of the Year

★ People Book of the Week

★ Highly Anticipated Thriller of 2022 by Buzzfeed

★ Goodreads Most Anticipated Mystery of 2022

★ Bookbub Most Anticipated Mystery & Thriller of 2022

Order What Happened to the Bennetts Today! 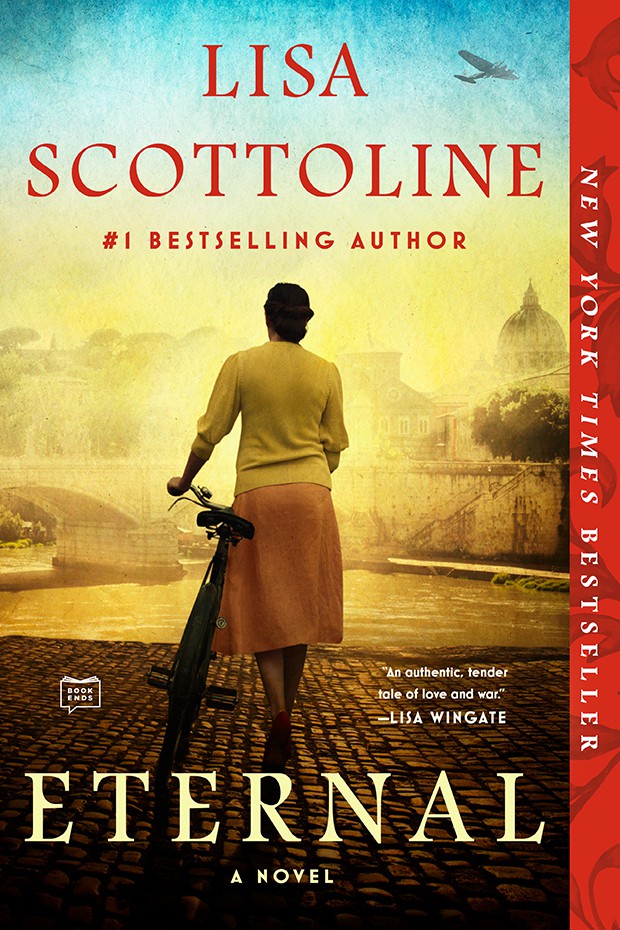 ★ Chosen as a "Buyer's Pick" by Costco

★ A Bustle Most Anticipated Book of March 2021

★ Amazon Editor’s Pick for “Best of the Month”

Happy Pub Day to my short story, "Pigeon Tony's Last Stand" as part of the We Could Be Heroes collection, which is available today on ebook and audiobook from @AmazonPub! It is free for Amazon Prime members! Enjoy the return of the Tonys and Mary DiNunzio!
https://bit.ly/3K6pb1N

Thrilled to be part of this short story collection from @AmazonPub along with @lisaunger, @janelleb, @thrillerchick, and @VictorMethos! Hope you enjoy!

Beautiful By Lisa Scottoline Ladies, listen to me.

Thank you to @crimereads for hailing LOYALTY as a

Happy Pub Day to my short story, "Pigeon Tony's Last Stand" as part of the We Could Be Heroes collection, which is available today on ebook and audiobook from Amazon Publishing! It is free for Amazon Prime members and Amazon Kindle Unlimited members! Fans of my Rosato & DiNunzio books will love the antics of the beloved Tonys and Mary DiNunzio and will cheer them on as they redefine the definition of a hero. For those who have not read the series, this is a great introduction!
bit.ly/3K6pb1N ... See MoreSee Less

As soon as I saw this, I went to my Prime account and got the story. I just sat at my computer and read it start to finish. LOVED IT!!! I miss Mary and the Tonys. I also enjoy your Monday night chats. In CA it starts at 4:30 PM, so I am not always home. However, I watch it when I can. I won't miss a week. I have been a reader of your books from the very beginning. Keep writing.🥰🥰

I’m so excited to read this. I love that Pigeon Tony is getting his own story!!!

You are astonishing! I remember when you came to B&N Freehold NJ (2005?), breezing through the door with a big smile and some witty banter, excited to greet your readers and have a lively conversation. And so it continues ... thanks for sharing your talents with the world! ❤❤

I just remembered that Pigeon Tony was one of Mary’s dad’s friends! This is going to be great!

I’m reading it now and it’s great. Congratulations, you’ve done it again. I have Kindle Unlimited but I think I need to buy a copy to have in my collection. What a pub day!!! Pigeon Tony, Code Name Sapphire by Pam Jenoff and The House Guest by Hank Phillippi Ryan. My Kindle and Nook apps are smokin hot!

I love that series!!! Such strong female characters. I love the local references. Any new ones in the works?

I’ll be reading it tonight or tomorrow! Yay!!!

So bummed that this was not on paper book. I Have no way for e books and don’t like audio. So I guess I’ll never know about it. Any chance it will ever be out on paper

Thank you for another DiNunizo story. I’ve missed them, started this today 💟

Delightful so far. “I have a prostrate the size of Jersey”. Ha, being originally from N.J. I cracked up at this line.

Great books! Love all the characters.

Will Mary and co. be back for a full-length adventure?

Thank you SO much! I love the Tony’s and can’t wait to read and listen!

Read it. Loved it.

Loved pigeon Tony and all his friends

It's been years since the audiobook was available by us. Fortunately, our library stocks a hardcopy and Tom reads from it for me at bedtime. He's no Barbara Rosenblat but he's there when needed and she isn't!

Wish it were in book form. I love those characters.

Thanks Lisa I just put it on my Kindle! Can’t wait to read it! Hugs♥️🦅🦅

It was awesome to wake up to the email from Amazon that it was in my kindle! Can't wait to read it!

Please, please tell me it will be available on other audiobook companies. I do not have Amazon Prime. Love Pigeon Tony!!

Thank you for these fascinating historical facts! I’m learning so much!

I used to live near a tuna processing plant in California. I bought tuna right off the boats. I never knew this about canned tuna. Love learning new things especially history.

hese are SO fun! Thanks!

I love these on Monday nights!

I love these Monday presentations!!!

I love it. Pretty for summer time

I love pigeon Tony, but I don't have amazon prime.

I’m an ex daughter in law of a very Sicilian family. The ex, I don’t miss but the Sicilian culture/FOOD! I sure miss, oh and the Italian card games after Sunday family dinner

Great prize! You are so generous, Lisa!🥰

Formally from Chester springs and now living in CT - love your books!!

Hi Lisa. I love all this background you are sharing.

I like that family! I’ll take mine no salt 😀